Earthquake Risk: Ready for the Big One? 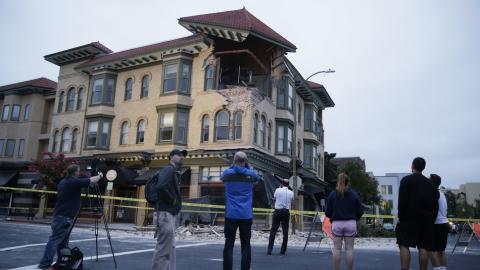 The earthquake that struck California that night measured 6.0 on the moment magnitude scale, the biggest seismic event to hit the area since 1989. Homes burned down. Roads buckled. Storefront windows burst.

Commercial buildings suffered extensive damage, too – even those that had been retrofitted for earthquake safety.

Within days, the city’s damages amounted to $362 million, but the United States Geological Survey says it’s not over: that number could reach a billion before all's said and done.

The thing about earthquakes is...

They happen all the time: the U.S. sees thousands of quakes every year. Happily, most of these are too small to do much harm. But when a big one hits? It hits hard.

Bear in mind, these are no-notice events. Unlike hurricanes and floods, which we’ve gotten good at predicting, even the earthquakes that we know are coming seem to come out of nowhere.

“Therefore,” FEMA said, “it is more important for the private sector and communities to understand their risks, make a mitigation project plan, and take earthquake mitigation actions to ensure safety and stay in business.”

Are you ready for a big one?

Speaking of earthquakes that we do anticipate, there’s a big one brewing off the pacific coast.

We’re not talking about the San Andreas. There’s a different fault system about 100 miles off the north coast, called Cascadia, which runs from California to Vancouver – and it’s got an even bigger surprise up its sleeve.

Cascadia is the same fault that shook out a 9.0 onto the lower 48 back in the 1700s. That historical quake is believed to be the biggest the continental U.S. has ever seen.

It’s no matter of speculation. The San Andreas and Cascadia fault systems are going to unleash some big shakes. We know this – which is why it’s truly shocking that only 6% of Californians have earthquake insurance.

“In large part because of cost, complacency and the ‘it’ll-never-happen-to me’ syndrome, Californians are more likely to own a swimming pool than an earthquake policy” (The Sacramento Bee).

It’s not just Californians; all across the country, the number of people who purchase coverage for these events is actually dropping. Last year across the Western U.S., only 22% were insured against earthquakes. This year? Just 10%.

Put your business on solid ground

While you can’t keep an earthquake from striking, you can take tangible steps to protect your home or business.

If you don’t already have it, contact us about getting earthquake insurance and check out these earthquake resources from FEMA to help you assess your risks, prepare for the event and respond efficiently when it happens.