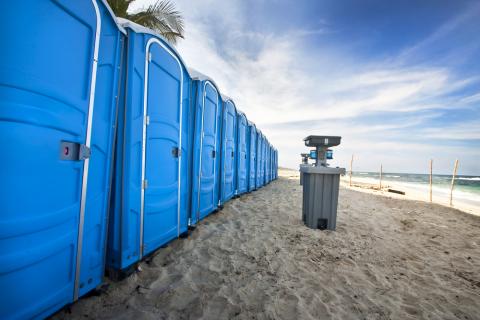 You know what they say:  When ya’ gotta’ go, ya’ gotta’ go! And when Mother Nature calls, it sure is nice to have a facility handy. Thank goodness for the ubiquitous portable toilet.

They’re everywhere – campgrounds, construction sites, outdoor festivals, and at the sites of natural disasters. And just think how our lives would be impacted without them. We’d be burning unnecessary fuel to leave parks and events to find other restroom facilities. We’d be spending huge amounts of money and negatively impacting our natural resources by building permanent facilities. And of course, there’s the public health aspect.

Did you know portable restrooms have been providing us relief for centuries? Portable toilets, made up of a stool with a hole in the middle and a clay pot underneath, first appeared 3,500 years ago in Egypt and were often buried with high-ranking officials.

From the Middle Ages until about 1800, most people’s homes had a portable toilet, also known as a chamber pot, consisting of a small round vessel made of metal, porcelain, and sometimes even glass. But folks walking by the homes had to be cautious, as the contents were often simply thrown out the window!

In the 1800's, British Army officers on overseas military campaigns used ‘campaign’ toilets featuring a decorative porcelain bowl and a fresh water pump. Unfortunately, they came with no toilet paper.

During World War II, U.S. infantrymen passing through England often used portable toilets with "T. Crapper" monogrammed on them, a reference to the plumber and company who manufactured them, Thomas Crapper. And so the American colloquialism for the toilet was born.

The portable toilets you see today had their beginnings in the shipyards of Long Beach, California, during World War II. As part of the war effort, there was a huge need to build and repair naval vessels. That required thousands of laborers – men and women – who had to travel a good distance to use a bathroom. So small wooden ‘cabanas’ were crafted using modified 55-gallon drums as a waste tank, placed onboard ships being worked on, and moved around as work progressed. Yes, the porta-potty even helped win WWII. And during the housing boom after the war, the construction industry soon adopted the portable toilet as the perfect jobsite companion.

A toilet by any other name…

Over the centuries, the humble portable toilet has evolved, been the object of countless jokes, and taken on a host of colorful names:

Whatever you call them, it’s hard to imagine life today without them. But if you’re in the business of renting these facilities, or you use them in your business, it’s not hard to imagine what could go wrong if you don’t have the right insurance. You have to worry about transporting the units, servicing and cleaning, inspections, sewage pumping and cleaning, pollution and public health exposures, vandalism, theft, accidents, and a host of other issues.