Is the Tide Turning for Cannabis Financial Risks? 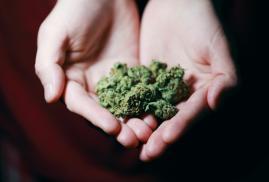 The growing marijuana industry has created a conundrum for financial institutions. On the one hand, marijuana remains illegal at the federal level. On the other hand, many states have legalized the drug, public acceptance has increased rapidly, and the industry is raking in an impressive amount of money. It’s an enticing market – but it’s also a legally complicated one.

The Legalization of Marijuana

However, the federal government still classifies marijuana as a Schedule 1 controlled substance, putting it in the company of heroin, LSD, ecstasy, methaqualone, and peyote, drugs that have no currently accepted medical use and have a high potential for abuse.

In states where marijuana has been legalized, the industry also creates significant tax revenue, as well as a large number of jobs.

Despite the impressive numbers, however, marijuana largely operates as a cash-only industry. This is because many financial institutions refuse to work with marijuana companies due to the federal classification of the drug. According to an article published at FindLaw, some banks agree to work with cannabis companies and then file suspicious activity reports for every transaction, a loophole that may help shield them from charges of money laundering or aiding and abetting a federal crime, but many financial institutions simply avoid working with companies in the marijuana industry.

The Secure and Fair Enforcement Banking Act, also known as the SAFE Act, was written to remove banking restrictions so cannabis companies could operate more easily in states where they are allowed. According to Forbes, elements of this bill have also been put into proposed coronavirus relief legislation.

The Takeaway for Financial Institutions

Financial institutions that avoid the cannabis industry because of the risk may find themselves left out of a lucrative market in the future. At the same time, proceeding without the proper amount of caution could result in legal problems.

The tide may be turning on marijuana. New laws are being passed at the state level regularly, and federal changes may also be coming. This is an area to watch.

If you have a business in the cannabis sector, Heffernan Insurance Brokers can help you navigate risk in your rapidly evolving industry. Contact our cannabis insurance team to learn more.