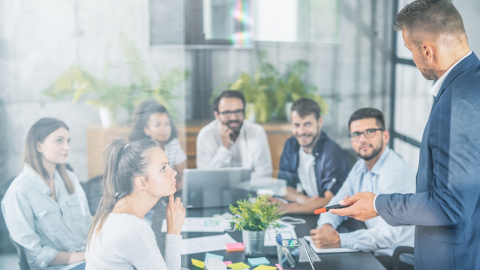 There’s a common refrain that people don’t quit bad jobs, they quit bad bosses. Being a good supervisor requires many skills, but one of the most important is the ability to coach workers. As this is not a skill that comes naturally to everyone, supervisors must learn how to be effective coaches.

High turnover rates have left many companies struggling to find enough qualified workers. According to McKinsey & Company, the voluntary quit rate is 25% higher than it was before the pandemic. Whereas 41% of workers who quit cite a lack of career development and advancement, only 36% cite inadequate compensation.

Companies are hungry for skilled workers; workers are hungry for career development. When supervisors provide the coaching workers need to grow their skills and advance their careers, both parties win. For companies struggling with retention, this is especially important.

The ability to coach can also be an important risk management tool to prevent lawsuits.

Imagine there are two teams in the same company. We’ll call them Team A and Team B.

What Prevents Supervisors from Being Great Coaches

According to Dr. Steve Albrecht, coaching achieves many goals: it lets employees know where they stand and how they can improve; it helps them set their own goals and figure out what they need to do to advance. Coaching can also solve conflicts between employees and reward them for their efforts.

Even though coaching is important, supervisors don’t always provide any. According to Albrecht, this can be for several reasons. Some supervisors may be afraid of confronting poor performers or creating conflict. They may also be dealing with a lack of resources or management support. In some cases, they may have never received training on how to coach workers.

Just as workers need coaching on how to succeed, supervisors need pointers and training on how to become good coaches.

How and What to Coach

Workers may need help with different things, depending on the nature of their jobs and their strengths and weaknesses. However, Albrecht says coaching should focus on seven main areas:

When employees have problems in these areas, coaching could be part of discipline intervention or conflict resolution. However, coaching doesn’t always need to be something negative. Albrecht says supervisors can also offer coaching as a reward, to help improve morale, to provide career planning and mentorship, or to identify skill gaps.

Both high- and low-performing workers can benefit from coaching.

Albrecht warns that expecting low performance can be a self-fulfilling prophecy. Expectations are powerful: supervisors with negative expectations of workers may receive exactly what they expect. Instead of giving up on at-risk and low-performing workers, supervisors may need to spend more time coaching them. Some of these workers may have potential – they just need some guidance.

At the other end of the spectrum are the employees who are already performing well. Some of these workers may be rising stars who need coaching to reach their full potential.

How to Coach Successfully

To ensure successful coaching sessions, you need to set some ground rules.

Albrecht says it’s important to respect each other’s time. You should not allow any physical or electronic interruptions and you should identify a clear objective. For example, is this corrective coaching with the goal of compliance or is it career development coaching with the goal of developing personal skills? Once you’ve defined a clear objective, you can plan the session.