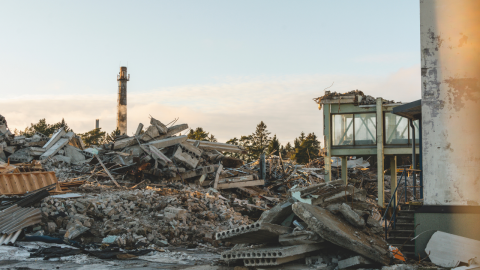 On December 10, 2021, a tornado outbreak hit several states. NOAA says that more than 80 people died as a result. Some of these deaths involved employees trapped at work.

According to Courier Journal, eight workers at the Mayfield Consumer Products candle factory died. Now at least three survivors are suing. Reuters reports that a lawsuit has also been filed against Amazon. Six people died at an Amazon warehouse in Illinois, and the family of one of the victims has filed a lawsuit.

Could the outcome have been different?

This is the Parsons Manufacturing Plant in Roanoke, Illinois before and after it was struck by an F4 tornado on July 13th, 2004.

How many workers were injured/killed?

In 2004, Parsons Manufacturing Co. was struck by an F4 tornado with winds exceeding 200 miles per hour. According to the Chicago Tribune, F4 tornados are usually deadly, and employees were working at the manufacturing plant when it hit, but thanks to the preparation of the owner, Bob Parsons, there were no fatalities. The plant had invested in concrete-reinforced restrooms that doubled as storm shelters, and the company practiced fire and tornado drills regularly to make sure everyone knew what to do.

You can read the complete report on the Warning Response Process at the Parsons Company.

With the rise in natural disasters, people and companies are increasing disaster readiness. There’s a good reason for this. As the above stories illustrate, it can really make a difference.

This may already be happening. The National Oceanic and Atmospheric Administration (NOAA) tracks natural disaster and climate events with losses exceeding $1 billion. In recent years, these events have become both more common and more costly.

In 2021, there were 20 billion-dollar weather and climate events. These events include the West Coast wildfires, the December tornado outbreak, Hurricane Ida and Hurricane Nicholas, along with other drought, flooding, and storm events. The total cost of the 20 events is $145 billion.

It looks like the years to come may be just as bad. The wildfires on the West Coast have been getting worse, and research from the University of Washington and the University of California, Santa Barbara indicates that we won’t be getting any relief in the near future. The study predicts a decade-long burst in wildfire activity.

The hurricane outlook may be troubling, as well. NOAA says 2021 was the sixth consecutive year with above-normal Atlantic hurricane season activity. It’s believed that a warm phase of the Atlantic Multidecadal Oscillation is causing long and stronger storms.

Are You Prepared for the Next Disaster?

Natural disasters are on the rise. Make sure you’re prepared at home and at work.

There are multiple resources to help families and businesses tackle disaster readiness.

Disaster readiness should also include insurance. After a disaster strikes, insurance can help you recover. The brokers at Heffernan can help you obtain the coverage you need.

Talk to our team.