How the Megafire Trend is Changing Property Insurance Underwriting 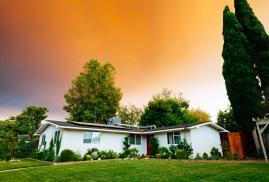 Wildfires have always been a threat – but not this big of threat. It seems that we’ve entered the age of the megafire. As wildfires cause more and more damage, insurance underwriters are feeling the heat.

A Rise in Fires

If you think wildfires have been getting worse, you’re not just imagining things. According to The Economist, researchers at the University of California, San Diego, and Stanford have found that the area burned by wildfires in the United States has almost quadrupled over the past four decades.

In a report from the Insurance Information Institute, three factors are identified as contributing to increased wildfire frequency and severity: growing populations and built environments; ill-advised forest management policies; and environmental factors.

Whether you blame climate change, forest management, urbanization or all the above, the result is clear. Wildfires have become a major threat to everyone, including homeowners, businessowners and insurers. What’s less clear is how everyone should deal with the rising risk.

A Crisis in California

California has been especially hard hit by wildfire activity.

In an interview with The Press Democrat, Shana Jones, chief of Cal Fire’s Sonoma-Lake-Napa unit, said, “Our fires have gotten larger over these past several years, which means that we need more troops on the ground and the duration of fighting the fire is extended.” Jones also said that fire season had stopped being a season and had become a year-round problem.

Given this, it’s perhaps not surprising insurers have been opting not to renew coverage in particularly high-risk areas. In response, Ricardo Lara, the California Insurance Commissioner, imposed a statewide, one-year non-renewal moratorium. The moratorium was expected to help approximately 800,000 homes in wildfire disaster areas.

After the moratorium is over, new requirements may be put in place. A proposed bill, AB 2367, would require carriers to insure homes that meet new fire-hardening standards, according to Insurance Journal, as well as requiring insurers to provide financial incentives to homeowners who make their homes more resistant to fire.

Insurers Caught in the Crossfire

If insurers are going to provide coverage in wildfire-prone areas – and in some cases, due to legislative actions, they might not have much of a choice – underwriters need to have an idea of the level of risk involved. But when wildfires are unprecedented, that’s no easy task.

According to an article by Monique Nelson, published in Insurance Thought Leadership, insurers can no longer use past wildfire seasons to model future risks. Instead, insurers need to use more innovative and strategic underwriting procedures. This may involve more data points and possibly the combination of multiple models.

The insureds need to take the rising risk seriously as well. According to Property Casualty 360, some organizations are taking proactive steps to manage their wildfire risk, including the use of fire-retardant gel when wildfire danger is imminent.

The wildfire threat won’t go away any time soon, and it may continue to get worse. Dealing with this growing risk will require innovation and collaboration.

As a California property owner, you need a local agent who can advocate on your behalf and help you sort through your risk management options. The personal insurance team at Heffernan Insurance Brokers can help. Contact us to learn more.