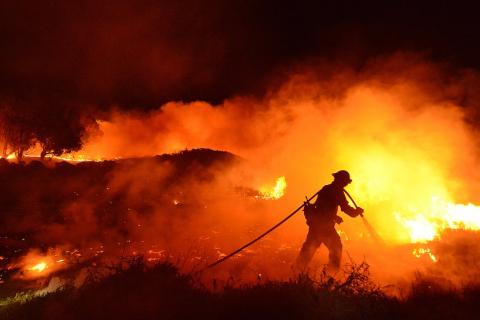 It’s the time of year for wildfires, and let’s just say the season is living up to its reputation. According to National Geographic, the United States sees more than 100,000 wildfires per year, consuming 4-5 million acres on the whole. Within the first five months of this year, the Insurance Information Institute said there were somewhat fewer fires than the year before (20,563 versus 22,112), but in terms of acreage, the situation is more severe than usual. From January through May, 1.6 million acres have burned in 2016, as compared to 410,990 acres during the same period last year.

That’s for the United States as a whole. In California, Fortune said two recent fires – Valley and Butte – have displaced more than 20,000 people and consumed 138,660 acres between them. The Valley fire alone is set to be the most destructive California wildfire since 1991.

The costs follow the severity, as one might imagine. According to the nonpartisan research organization Headwaters Economics, in the 1990s, the federal protection and suppression of wildfires cost less than $1 billion a year. Between 2002 and 2013, it rose to more than $3 billion annually. This year in California, the season was running around $212 million before Valley and Butte exploded. Those will make the previous estimate "look like a drop in the bucket in comparison," Fortune said.

If you’re concerned about the safety of your home, pets, and family during wildfire season, here are some tips you can follow to help protect them.

Avoid the two most common causes of wildfire.

Protect your property and your family with common-sense strategies.

Don’t stop there. Make sure your insurance limits are adequate and up-to- date with current building values. If you operate a business, ask your Heffernan Insurance Brokers agent about business interruption insurance. We recommend reviewing your policies with your agent at least once a year.